Did you know that Bun mi vang is the breakfast of champions? In this article of the Saigon Street Food Series, we’re going to delve into the Cho Lon area in District 6 to experience this one-of-a-kind noodle!

Bun mi vang. The breakfast of champions. For this morning meal edition of Street Feast, we dove deep into the District 6 section of Cho Lon, Ho Chi Minh’s Chinatown precinct, for this noodle experience.

What is Bun Mi Vang (Vermicelli and Egg Noodle Soup)?

Bun mi vang is a noodle soup boasting TWO different kinds of noodles: (1) bun, thin rice vermicelli, and (2) mi, a thicker egg noodle. It is one of the rare instances in Vietnam where two types of noodles are showcased. On the far western side of Ho Chi Minh City lies District 6, an enclave of Vietnamese locals with Chinese ancestry. The food selection in this sector of Saigon is for the most part, of Chinese origin with a Vietnamese twist. The bun mi vang featured in this episode is just that.

Ingredients of a Perfect Bowl of Bun Mi Vang

This noodle dish plays host to a number of delectables including fried dumpling, fried shrimp cake, fish balls, pork, tofu, watercress, and the real standout flavor—pickled minced garlic. The soup is accompanied by a glass of soymilk, which can be iced upon request but is usually served warm, and a DIY condiment that is whipped up at the table while you wait for your meal to be assembled. The DIY condiment, a mixture of mung bean sauce, black vinegar, soy sauce, and chili paste, is used as a dipping sauce for the assorted bits in your soup and not as a flavor enhancer, so don’t pour it into your soup if you want to avoid being looked at strangely.

Placing an emphasis on homemade, everything from the fish balls to the soymilk is made on-site. You can tell simply by inspecting the misshapen fish balls; factory processed ones come in perfect spheres while theirs is more of an oval shape. The fish balls are notably more flavorful and a lot denser than store bought balls. The original bun mi vang recipe hails from the Fui Jien province of China, but the components of this dish are very much Vietnamese. Still, though, the recipe remains somewhat insular, confined to the boundaries of Cho Lon. In actuality, many Vietnamese I questioned had never heard of or eaten this dish before.

Placing an emphasis on homemade, everything from the fish balls to the soymilk is made on-site.

The Story of the Best Bun Mi Vang in Town

Located on 54-56 Hau Giang Street, a yellow marquee printed with the dish’s name ‘BUN MI VANG’ welcomes every customer. And the story of the owner of the store – Phung is even more remarkable. She grew up in this neighborhood and first visited this unnamed canteen as an adolescent with her father, who works for an electronics company right around the corner. The shop is situated on a highly modernized block and appears to be the sole street food operation among a number of cafes and milk tea chains. Running for over two decades, the shop is manned by two brothers who inherited the stall from their aging parents. In the morning, the elder brother gets to cooking at around 6 to 7 a.m. until 11 a.m. In the evening, his younger brother runs the show from 4 to 9 or 10 p.m. depending on the availability of the product. 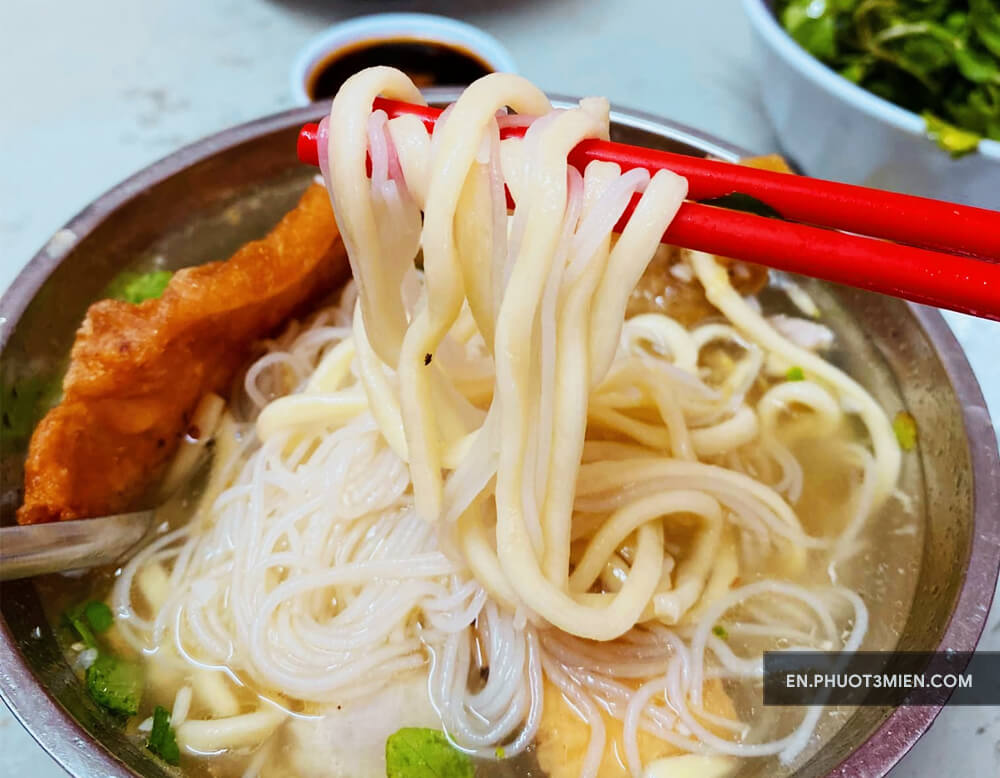 While this dish is consumed throughout the day, Phung stated that this is traditionally morning fare. The clientele is predominantly families with Cantonese roots. Throughout the day, the clamor of Cantonese can be heard wafting through the restaurant. The price for one bowl is 37,000 VND while a glass of soymilk is ticketed at 7,000 VND. You can also order a side of ham hock (pork knuckles) just in case you’re still hungry. Phung comments that when she first started frequenting this joint, a bowl of bun mi vang was much cheaper. While it has outlasted neighboring street stalls in the area, this shop hasn’t been able to resist the rising prices of marketplace ingredients. This price hike is inevitability as Vietnam’s economy continues to thrive.

While this dish is consumed throughout the day, Phung stated that this is traditionally morning fare.

From the city center, it takes roughly about 30-40 minutes to get to the store by taxi depending on traffic. However, is well worth the drive for those dependent on a hearty breakfast to get them going through the day. It is also one of the greatest breakfasts I’ve ever indulged in on my travels.

Make sure to not overeat to avoid that food coma feeling. For those of you who are foodies, this is something to not be missed as the level of intricacy in order to find this place, coupled with the number of foodstuffs presented in this one course alone is something to gloat about.

Enjoyed this article and want more? For fun tips on what to do, see and eat in Vietnam, visit us at Travel Blog. 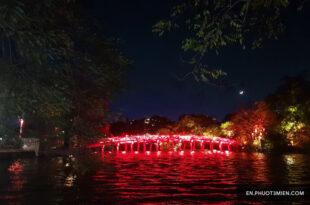 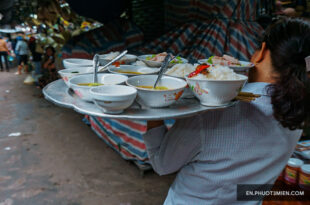